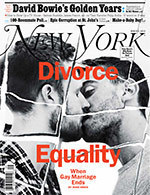 I noticed this cover of a recent New York Magazine in my house today, and I could not help thinking: Why is same-sex divorce different from any other divorce? There are still two people who at one point wanted to commit to live their lives together and have now decided not to.
Maybe it's amicable, and maybe it's as ugly as any tabloid cover story. So I found the cover headline "Divorce Equality" hypocritical. Anyone who gets married can get divorced (in most places). Period.
Equality means, quite simply, that the distinction between what we consider usual and what we consider different disappears.
In this case, it means that there is no such thing as "same-sex divorce;" there is only "divorce."
In the past two weeks or so, there has been no end of discussion and opinion on the decision annouced by Marissa Mayer, CEO of Yahoo!, to end Yahoo!'s policy allowing employees to work from home or other locations and that everyone must now return to working in a Yahoo! office.
Like many others, I was infuriated by this decision. I agree that it is contrary to the basis of the internet culture. I agree that the decision and its implementation (so far) is, essentially, a rookie mistake. I am endlessly stunned by people who think collaboration requires presence (I am personally proof of the contrary). And this is most certainly not a "mommy issue."
But the one piece that stood out to me was Sheryl Sandberg's contention that we are treating Ms. Mayer differenly because she is a woman.
Women and the men who support them have fought long and hard for an equal place at the corporate table, at all levels. Women are certainly under-represented in the upper ranks of management and in the boardroom.
But allow me to call out two issues:
One: Ms. Sandberg claims that we would not criticize a male CEO.
WRONG. I have seen many male CEOs blasted for all sorts of questionable decisions (and sometimes unfairly for good, if unpopular, decisions). Highly public decisions that make the evening news are never safe from critcism (in fact, our news media lives for controversy and creates it these cases).
My Point: We are as openly and widely critical of Ms. Mayer as we would be of any CEO who made a similarly public and controversial decision.
Two: Ms Sandberg claims that we are critical because Ms. Mayer is a new mother and this is a mother's issue. Any male CEO making this decision would have been expected to ignore the mother issue.
WRONG again. If a male CEO stepped in and summarily ended all telecommuting, he would have been lambasted not only for ignoring the needs of working mothers (despite my contention that this is not a mother's issue), but he would also have been called insensitive and sexist.
My Point: Ms. Mayer received the same criticism (maybe without the sexist claim). No holds barred.
By my definition of equality (above), Ms. Mayer has acheived equality. I don't know how she is treated inside Yahoo!, but the press, the public and all of us who offer our own opinions, offered both criticism and compliments as we would have were she male.
For all of the controversy surrounding her decision, we should celebrate this event as evidence that equality is possible. It is possible to look at and evaluate Ms. Mayer's actions as we would any CEO, male or female.
My good friend, Ayelet Baron, puts it this way: