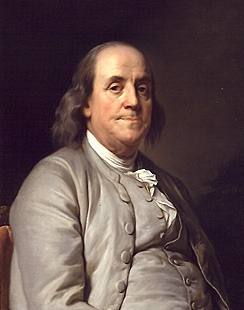 Benjamin Franklin was a man of many talents—statesmen, author, inventor, and activist. Franklin also had a way with words, crafting a huge collection of memorable quotes that remain popular today. In celebration of the 305th anniversary of Franklin’s birth, we look back on ten of the Founding Father’s most memorable quotes.

“Keep your eyes wide open before marriage, and half-shut afterwards.”

“Whatever is begun in anger, ends in shame.”

“The sleeping fox catches no poultry.”

“Being ignorant is not so much a shame as being unwilling to learn.”

“Love your enemies, for they tell you your faults.”

“By failing to prepare, you are preparing to fail.”

“Having been poor is no shame, but being ashamed of it, is.”

A huge collection of Benjamin Franklin quotes at Answers.com.

This and more from a man whose wisdom seems endless.

Here comes another one of my little pet peeve rants....
Many years ago, I was in a Crate & Barrel store in Chicago (enough years ago that Crate & Barrel was THE place to shop for young up-and-comers, then called yuppies), and overheard a young couple discussing some kitchen accoutrement. The young man said to his partner:

(check the link if you also don't know what it is).
There was the incident where I pointed out to someone an amusing use of tempus fugit. He responded with "Right, let the buyer beware!" (again, take a look if you don't know why that's odd, and yes this is Latin, not French)
Today, I received an e-mail post from one of the many marketing groups to which I belong. This particular message was about word use and writing (good writing, one presumes). This message opened with:

"Vitriol is our word du jour this week"

In my house, when I make one of these completely disconnected mis-uses of an idiomatic phrase (English or otherwise), it's usually the subject of hysterical laughter, and not the butt of a bad joke about inability to express myself.
Careful with those non-English idioms!

Environmental Entrepreneurs (E2) co-founder Nicole Lederer just posted this piece on Huffington Post discussing the development of the clean economy over the past decade and what it's future might look like.

This is a must-not-miss.

You can also join in the E2 10th anniversary celebration and become part of the start of the next decade of creating the clean economy. I'll be there!

This story (text below) could be one of the better, if most hare-brained, ideas of the day. It might end up collecting far more than the Nevada State Police ever could in speeding tickets. And the resulting Darwinian effects could make Nevada a much more desirable place to visit.

(if you didn't see it already, this is sarcasm!)

DiSimone calls his idea the "free limit plan." He estimates the plan would bring in $1 billion a year.

First, vehicles would have to pass a safety inspection. Then vehicle information would be loaded into a database, and motorists would purchase a transponder.

After setting up an account, anyone in a hurry could dial in, and for $25 charged to a credit card, be free to speed for 24 hours.

The Nevada Highway Patrol isn't keen on the idea, saying it would lead to increased injuries and traffic deaths

Breaking News Alert
The New York Times
Thu, September 02, 2010 -- 11:51 AM ET
----- Coast Guard Says Oil Rig Exploded in Gulf of Mexico, A.P. Reports An offshore oil rig exploded on Thursday in the Gulf of
Mexico, west of the site of the April blast that caused the
massive oil spill, the Coast Guard told the Associated Press. Coast Guard Petty Officer Casey Ranel said that the blast was
reported by a commercial helicopter company on Thursday
morning. Seven helicopters, two airplanes and four boats are
en route to the site, about 80 miles south of Vermilion Bay
along the central Louisiana coast. Read More:
http://www.nytimes.com/aponline/2010/09/02/us/AP-US-Gulf-Rig-Explosion.html?emc=na
Mashable today is reporting on a USC Annenberg School of Communications study that concludes (among other things) that exactly 0% of Americans would be willing to pay for Twitter.
It seems like an obvious conclusion - that no one would be willing to pay for something that they value at "free."
Mashable makes and interesting comparison to the resistance to pay for news content on-line, which is a very different situation. Traditional news outlets, particularly the higher-quality ones, have historically charged for their service: we paid for newspapers (the physical versions) and the on-line content was an after-thought. Now that the on-line content is the primary access venue and the paper versions are fading quickly (more slowly for the higher-quality outlets, but still fading quickly), the access models have to change also.
Anecdotally, it's not hard to see that there is value in something that once carried a price, but is now free. Similarly, there is no value attached to something which has always been free. Meaning, it makes more sense that we'd pay for the New York Times on-line, but not for Twitter (or, for that matter, for Mashable).
So the acute sense of the obvious shows up again: the question isn't whether we'd pay for Twitter, but what Twitter can offer that would be worth paying for? Given Twitter's model of outsourcing nearly every additional feature and function to third-party services, can they be creative enough to create something that makes us say "wow - that's really worth the $9.95 per month!?"
I'm sure we'll see that in Mashable as well.

In fact, I'm not much of a stereotypical sports guy (though I do admit to one fanatical loyalty). But I suppose I can say the analogy is not actually mine.

I was listening to the audiobook version of Tom Peter's Little Big Things, when at one point Mr. Peters (also with his own disclaimer detesting sports analogies) noted that, at age 67, he is "playing in the second half." He added, with his usual flair for pointed proof that this was certainly true, unless he managed to live to age 134.

Over the following weeks, as I discussed with friends old and new some of my plans and ideas about the particular transition in my life at this particular time, I found myself using this phrase - "playing in the second half" - more and more to describe why I thought it was about time I learned some of the things I have learned and made some of the key decisions I am making.

If you are either male and in what we commonly call the mid-life period, or even just familiar with the stereotype of the middle-aged american male, this won't sound at all odd. We've created a veritable cultural construct called mid-life crisis that encapsulates everything from questioning nearly every aspect of one's life to attempting to recapture one's youth through conspicuous consumption often associated with motorcycles or convertibles.

It could be argued (and nearly everyone in my life has asked me if this is true) that I am experiencing this mid-life crisis. But to be honest, it doesn't feel like a crisis. In fact, it feels more like just another point in my life where I am making some important choices (which is something I believe we all do every day). The only difference I can see between choices and decisions I am making this year are is that I believe that my choices are better informed and made with a greater understanding of myself and why they make sense for me.

Which led me to the question: Why is it a crisis?

I suppose it’s more of a life crisis than an actual crisis (I’m thinking of an earthquake, stock market collapse, or massive oil spill here), but I think the so-called mid-life crisis is characterized by re-evaluating your path in life based on your now-greater knowledge and understanding of yourself, your situation and your wants and needs.

It makes perfect sense to me that anyone who has reached the so-called second half (double your age; if it's unlikely you'll live that long, then you're in the second half) would have a far better understanding of themselves, their preferences and desires and what makes life interesting and fun for them. It follows that the life choices you might make at this point in your life would be better than ones made, say, at the beginning of your working career.

So let me take the analogy one step farther. The common wisdom (which I'll accept without argument for now) is that we start our adult lives by making some early decisions and then work hard to make those decisions work out well. Then we reach a point where that has run its course and we find ourselves needing to make some new or additional decisions. Let's call the initial decisions the game plan and the decades of working hard to make them happen, the first half.

Then we reach half-time - time to pause and make adjustments: sometimes it's a few minor tweaks, sometimes a completely new plan. But it's the point at which we know ourselves, how we play and what we need to do to win (or, in this analogy, be happy with our journey or outcome). Sound familiar?

So, again, I wonder: why is it a crisis? or is this social construct we've built really about making half-time adjustments?

It seems that everyone I know has a sports idol named Joe. I think I'm going to follow the example of mine and make some brilliant - I hope - half-time adjustments and just skip the crisis.

Here's an interesting article from HBR that illustrates once again how things we take for granted influence our perception and decision making.

I might have argued that it was really all the biscuits, gravy and fried chicken that weighs down the south, but as it turns out, being at the bottom of the map has its advantages (yes, beyond the biscuits).

It seems that we tend to find things that are "down" more accessible and easier to deal with than things that are "up." And that seems to extend to the map, where we find traveling south easier than traveling north (all of you who grew up in the 70s, please stop shouting "but, north is up!")

Think about that next time you give directions to something you claim is really easy to get to, or when you're heading down home for some (yum!) biscuits.